Home ವಾರ್ತೆಗಳು Karavali Work of Lady Goshen hospital is moving at good pace as expected ; will be ready by December-2014-Says Dr Moily

Work of Lady Goshen hospital is moving at good pace as expected ; will be ready by December-2014-Says Dr Moily

Mangalore, June 24:  Speaking to media reporters during his visit to Lady Goshen hospital on June 24, Monday, Dr Moily said in his address that if the works at Lady Goshen hospital continues at the current speed, he is quite sure that the project will be completed by December 2014.

He also said that after inspecting the ongoing work on the new block sponsored by MRPL-ONGCC, he held discussion with officials of ONGCC, MRPL, district administration and the Lady Goshen hospital. He also appreciated the district administration, MRPL, ONGCC officials for taking the initiative. Once the two floors are built, it will be handed over to the hospital as many patients are facing difficulties, he informed.

Answering the question posed by the media reporters about the compensation for the Perne gas tragedy victims Dr Moily said that couple of days before discussions were held with HPCL in Bangalore and within six weeks necessary action would be taken and sanction the money soon, he said. 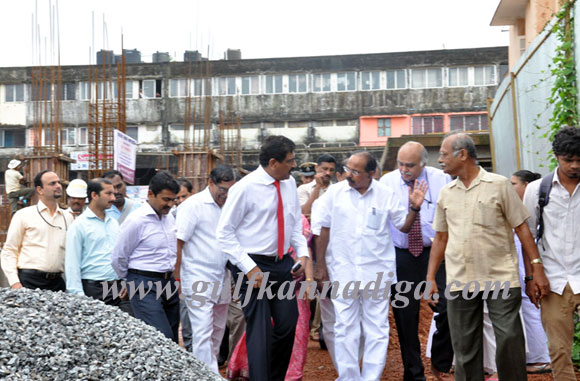 According to Raghavendra from MB Krishna Rao Shelter Pvt Ltd, contractor for the new block, 2-3 floors will be handed over to hospital by March, 2014 and construction work of the whole block would be completed by December, 2014.