Pall of gloom descends on Perne

8 killed, many suffer burn injuries as tanker turns turtle, goes up in flames

Perne, an otherwise calm hamlet near Uppinangady in Puttur taluk suddenly turned out be a hell in minutes, after the ill-fated tanker carrying 16,000 litres of LPG turned turtle at around 10.05 am on Tuesday.

Seconds after the incident, the entire area turned into a huge ball of fire. What remained later was a horrible scene which the villagers and the kin of the deceased may not forget in near future. The charred bodies of Vanitha and her 5-year-old son Chitresh found in a hugging position moved almost everybody at the rescue scene.

While tanker driver Cheluvaras was charred to death in his cabin, the body of Guruvappa, a tailor by profession, was found seated on his sewing machine. Shoba’s body was found in her kitchen. Omni car driver Vasanth who was at the spot to distribute beverages to the bakery was admitted to a private hospital in a critical condition, but succumbed to the injuries he sustained, in the hospital in the evening.

A few bodies could be identified only because of the place where their bodies were found as their bodies have been burnt beyond recognition, said a person in the vicinity.

Meanwhile, besides the persons, a number of pet animals like dogs, sheep and chicken and huge property including six houses, two shops and a garage have been destroyed in the fire. In addition, coconut trees, areca plantation and a banana trees/saplings too have been reduced to ashes. 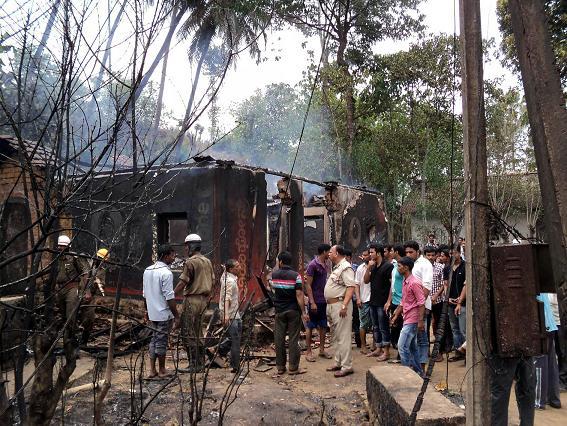 As the news of the mishap spread like wild fire, the police had a tough time in controlling the mob who started to rush to the mishap spot to have a glimpse of the spot.

Though the police tried to prevent people from going to the spot as a precautionery measure, a few managed to reach the spot through forest and other routes.

The police also had a tough time in managing the traffic as a number of vehicles ply on the highway.

However, they managed to divert the vehicles to some extent via Mani.