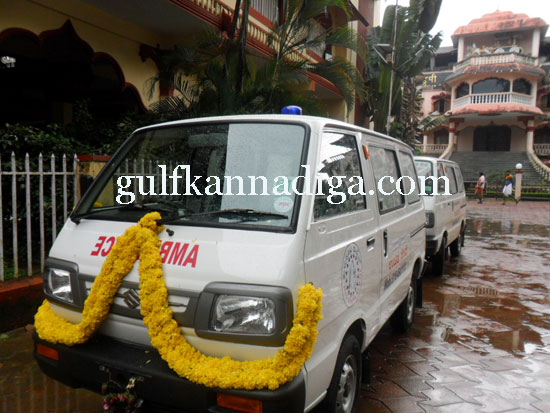 Udupi; In a touching ceremony  Tulu Koota Kuwait handed over an Ambulance  to Udupi Zilla Nagarika Samithi  to serve the poor and needy at the time of emergency  and  this service could be availed through calling the number given- 9164901111.

The programme was inaugurated and ambulance key was formally handed over by Madhwesh Tantri, Vidhwan of Paryaya Sode Vadiraja Math at Krishna Math on Friday July 12.

Nithyanand Volakadu,  General Secretary of Zilla Nagarika Samithi said that the Ambulance will have oxygen facility in it and as we are intended to serve the poor, we needed a vehicle which could go through the village road without much difficulty, so have opted for Omni than the big vehicle.

The service will be free for the poor and needy. The ambulance will run within 10 Kilometers surrounding Udupi like Malpe, Manipal etc. Importance will be given for the accident and emergency cases than dead bodies.