The Forbesganj Police published the arrest warrant in the local editions of Hindi dailies Hindustan and Dainik Jagran (on 8 and 9 April 2013). The list has 50 villagers of Bhajanpur including six dead persons – the six dead include three those killed in the firing on 3rd June 2011: the seven-month pregnant woman Yasmin Khatoon, 18-year-old Mukhtar Ansari, a pan shop owner and 20-year-old Mustafa Ansari, cleaner of a truck.

“The Police have published arrest warrant in newspapers against 50 people. Six of them are already dead. The dead people include three those who were killed in police firing – they are Yasmin Khatoon, Mukhtar Ansari and Mustafa Ansari. Villagers are terrified, many have fled, police are raiding village in the night,” Maulana Ale Rasool, Imam of the village mosque whose seven-year-old son was also seriously wounded in the firing, told Muslim Mirror over phone.

In the list of arrest warrant, 6 are dead, 14 are members of the victims families and 23 witnesses who deposed before the inquiry commission and also included their names in the court complaints.

Soon after the firing on 3rd June 2011, the local police had lodged three FIRs against the villagers who were protesting against the blockade of their old approach road by a company whose shareholders include leaders of the ruling Bharatiya Janata Party. The police had filed FIRs against 4000 villagers alleging that they had attacked the police with firearms wounding 28 policemen. However, these claims were later found not true by the rights activists.

Rehana Khatoon whose hand was pierced by police bullet and inserted into the waist of her infant killing him on the spot- Photo TCNThe arrest warrant has created havoc in the village of Bhajanpur predominantly resided by poor Muslim weavers – known as Ansari community. Many have fled the village as police have started raiding the area in the night.

Some members of the police firing victim families yesterday addressed a press conference in Patna detailing the police terror under the influence of the company managers, administration and local politicians of the ruling party.

The press conference was addressed by Tahreen Khatoon, mother of deceased Mustafa Ansari, Jamila Khatoon, grandmother of deceased infant Naushad and mother of injured Rehana Khatoon and Anzar Ansari, brother of injured Talmun Khatoon. The members of the victim families told the press that the police have issued arrest warrant to force the villagers to compromise with the company. They said many male members of the families have fled the village.

The Bhajanpur village (90% Muslim population) had an old road connecting them with the town. For decades they have been using the road that went through middle of an open field. Two years back the open land including the road was given to Auro Sundaram International Company by Bihar Industrial Area Development Authority to set up a Glucose factory. The villagers demanded that their road should not be blocked. When on 3rd June 2011, the company erected boundary wall blocking the road, villagers came out after Friday prayer and started protesting, following which the police opened fire killing four and wounding a dozen others.

The police have issued arrest warrant even when the state government-appointed Judicial Commission has not yet completed its inquiry into the police firing and the Supreme Court is hearing a petition seeking CBI probe into the firing.

Rights activists say the arrest warrant is a new move by the police to force the villagers for a compromise.

“While victims have not yet got justice and judicial commission has not yet submitted its report, the local police on behalf of the company are harassing the villagers. The company has been trying to force the villagers for a compromise through middlemen but the villagers have so far endured the pressure,” said Zahid Kareem, head of Bihar chapter of Association for Protection of Civil Rights.

Eminent social activist and journalist Nayyar Fatmi who has highlighted the issue since the day one condemned the police warrant. Talking to Muslim Mirror he said: “This is a pressure tactic by the company and administration to force the villagers for a compromise. Through this they also want to create rift among the villagers – between the victim families and other villagers.”

Mr. Fatmi also pointed out the fact that police never lodged FIRs from the victim families and the court has not yet started hearing of their complaints. 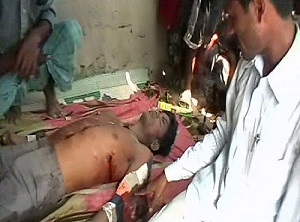 Body of Mukhtar Ansari after the postmortem. Photo TCN

“The victim families had approached the police to lodge FIR against the policemen involved in the firing, but police did not register their compliant. The victim families then moved the court of chief judicial magistrate, Araria and filed four complaints against the firing, but the court has not yet taken even cognizance of the complaints,” said Mr. Fatmi who heads Forbesganj Action Committee, which organized several protest demonstrations in last 2 years against the Forbesganj firing. Mr. Fatmi also addressed the press conference yesterday.

Mahendar Kumar, a noted social activist based in Patna who brought the victim families to the state capital for the press conference, termed the move as utter injustice.

“It’s utter injustice to the firing victims. While they are yet to get justice and even compensation from the government, the police are terrorizing them. The government must withdraw the arrest warrant,” Mahendar said. He added that the latest move is to show the Supreme Court progress in investigation. On this past 4th April, the SC has asked the state government to submit police inquiry report.

In the FIRs the police had claimed that thousands of armed villagers had attacked the police team. But rights activists said this was false claim as those killed in the police firing included a 8-month infant and a 7-month pregnant woman. Had they come with arms to attack police, they asked.

“The then SP of Araria Garima Mallick had claimed 28 policemen including her were wounded and treated at Forbesganj referral hospital, but through RTI, it was revealed that only two policemen were treated at the hospital including SP and SDPO,” said APCR which has approached apex court for CBI probe into the firing.