In his first Test, Rohit Sharma walked in at the early exit of Sachin Tendulkar, playing his penultimate and 199th Test. Two overs later, 82 for 4 became 83 for 5, with offspinner Shane Shillingford on a roll. Rohit, who five days ago made 209 off 158 in an ODI against Australia, buckled down to become the 14th Indian to make a century on Test debut. He put on 73 first with his captain MS Dhoni, but it was his association with R Ashwin that transformed the game completely. India ended the day with a lead of 120, the unbroken seventh-wicket stand worth 198, and No 8 Ashwin eight short of his second Test hundred.

This was a different version of Rohit from what has been on display over 108 ODIs. There were no cute strokes, there was no hitting his way out of pressure, there was plenty of leaving outside off. This was sensible batting, respecting the demands of the situation India had landed in against Shillingford. Ashwin, who came in at 156 for 6, matched his specialist batting partner on every count, be it solidity, strokeplay or elegance. The partnership visibly deflated West Indies, who would have rightfully eyed a sizeable lead in the morning.

Rohit took 13 deliveries to get his first runs in Test cricket, and they came via a pull to the long-leg boundary off a 145 kph short ball from fellow debutant Sheldon Cottrell. As he grew in confidence, there were glimpses of the touch he possesses. A back-foot drive against the pace of Tino Best, a cover-drive against the turn of Shillingford. But what stood out was his back-foot defence against the spinners. The preceding India batsman had found that hard to do, but Rohit had time to adjust. Shillingford’s doosra, which had claimed Tendulkar and M Vijay, was dealt with calmly from deep in the crease, and barring an over after tea, Rohit was hardy bothered by the offspinner.

Barring the sweep against Shillingford, Rohit was unwilling to be too aggressive, and a nervous stay in the 90s beckoned. But Cottrell offered him a freebie on the pad, which was flicked for four. On 98 now, Rohit deserved some luck to reach the landmark. It came next ball, a thick edge of an attempted drive flying to the third man boundary between slip and gully. There was no change in his approach after reaching the milestone as he batted safely till stumps.

Ashwin once again showed why he has such a high Test batting average for a No 8. His shots would have done specialist batsmen proud. He was also absolutely certain about his defence, whether forward or back. He drove confidently against the spin without fuss, and used pace to steer and cut. He whipped the fast bowlers effortlessly through square leg, and towards the end, even walked down the pitch to casually slap Darren Sammy down the ground.

Before this partnership, Dhoni’s 42 was crucial in breaking the hold Shillingford had gained. He drove the offspinner for successive fours before lunch the over after being put down on 12 by wicketkeeper Denesh Ramdin off Sammy. Dhoni hustled between the wickets like he does in ODIs, converting ones into twos and racing back for an overthrow. Sammy chose to give himself a few overs immediately after lunch instead of one of his quick bowlers, and West Indies, despite having sent back half the side, were not able to tie India down. Dhoni fell as soon Best was brought back on in the 52nd over with the changed ball, edging a clumsy drive to the keeper.

It was quite a comedown from the highs of the morning, when Shillingford rudely reminded India that this is a little more than Tendulkar’s farewell series. In a versatile display of offspin, Shillingford dismissed four batsmen, including Tendulkar for 10, albeit with some help from umpire Nigel Llong.

Often bowling with a scrambled seam, Shillingford got variable bounce and turn. India’s batsmen were tentative, not sure what the ball was going to do. Shikhar Dhawan prodded casually from his crease and inside-edged Shillingford on to his stumps in the third over of the day. Vijay walked cluelessly past a doosra and was stumped. Cheteshwar Pujara fell trying to ramp the sharp Cottrell, who was to slow down considerably in the evening.

Tendulkar was uncertain against Shillingford as well, even though he drove him for two boundaries past midwicket. He was soon hit on the back thigh pad as he failed to read a doosra. Umpire Llong raised the finger after some thought, even as side-on views showed the ball would have gone over, something Tendulkar indicated to his team-mates as he walked into the dressing room.

In Shillingford’s next over, Virat Kohli was given out caught at forward short leg. India were 83 for 5 now, but Rohit and Ashwin weren’t about to give in.

I am contesting the election with the love of the society : Ajith Kumar Rai 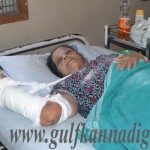